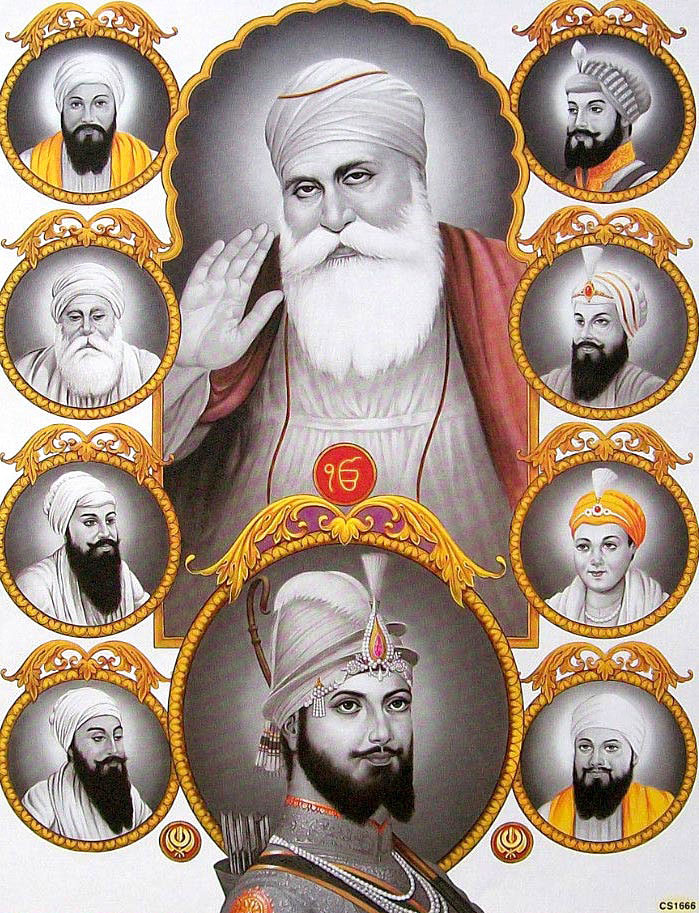 Legend of the Ten Sikh Gurus

The “Gurus” in Sikhism are regarded as enlighteners and divine messengers. They were the messengers of the Timeless, who brought forth the eternal wisdom. They were universal men who freed our minds from bigotry and superstitions, dogmas and and emphasized the simplicity of the religion. 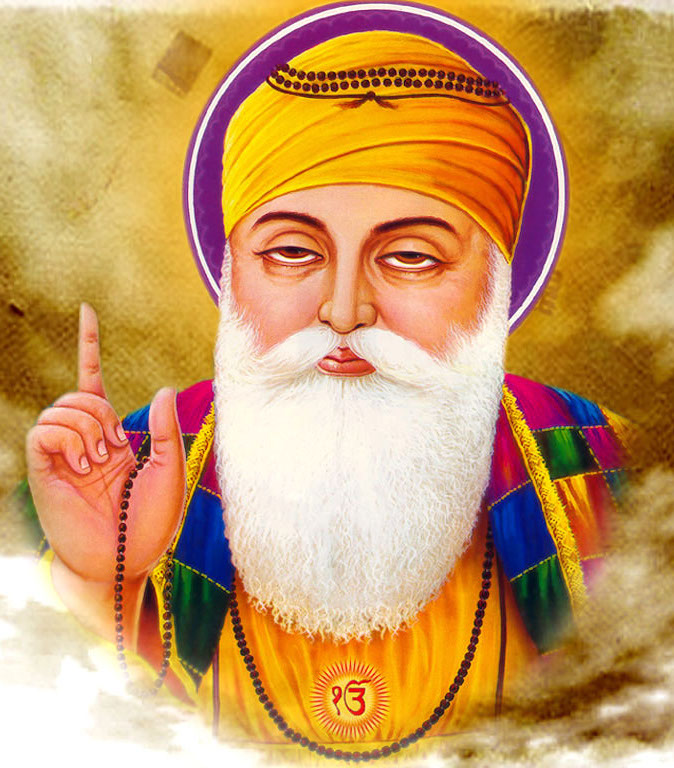 The first of the Gurus and the founder of the Sikh religion was Guru Nanak. He was born at Talwandi (now known as Nankana Sahib in Pakistan) on October 20, 1469.

Guru mastered Punjabi, Sanskrit Persian at an early age and in childhood revolted against ritualism, caste, prejudices, hypocrisy and idolatry.

He regarded Hindus and Muslims as equals and referred to himself as neither Hindu nor Muslim but as a brother to all those who believed in God and truth.

He made four great journeys, to all parts of India, and into Arabia and Persia; visiting Mecca and Baghdad. He spoke before Hindus, Jains, Buddhists, Parsees, and Muslims. He spoke in the temples and mosques, and at various pilgrimage sites. Wherever he went, Guru Nanak spoke out against empty religious rituals, pilgrimages, the caste system, the sacrifice of widows, of depending on books to learn the true religion, and of all the other tenets that were to define his teachings. Never did he ask his listeners to follow him. He asked the Muslims to be true Muslims and the Hindus to be true Hindus. 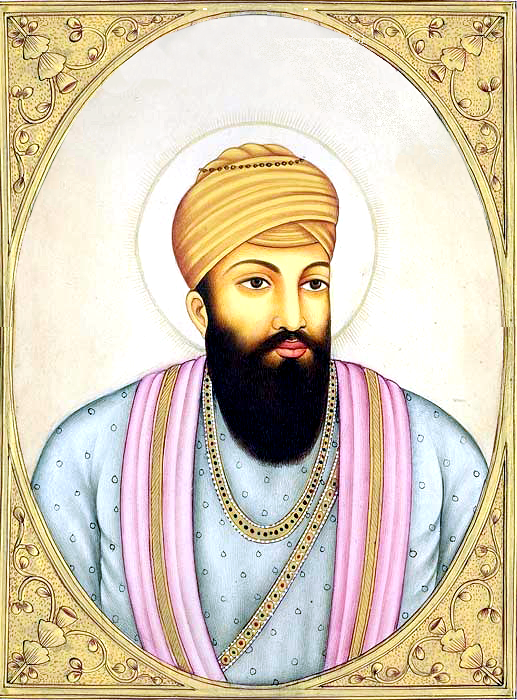 He was born in 1504. Guru Angad invented and introduced the Gurmukhi (written form of Punjabi) script and made it known to all Sikhs.

The scripture of the Guru Granth Sahib Ji is written in Gurmukhi. This scripture is also the basis of the Punjabi language. It became the script of the masses very soon. Guru Angad was a model of self-less service to his Sikhs and showed them the way to devotional prayers. He took great interest in the education of the children by opening many schools for their instruction and thus greatly increased literacy.

For the he started the tradition of Mall Akhara, where physical were held. He collected the facts about Guru Nanak Sahib’s life from Bhai Bala and wrote the first biography of Guru Nanak Sahib. (The Bhai Bale Wali Janamsakhi currently available is not the same as that which Guru Angad Sahib compiled.) He also wrote 63 Saloks (stanzas), these were included in Guru Granth Sahib. He popularized and expanded the institution of ‘Guru ka Langar’ started by Guru Nanak Sahib earlier. 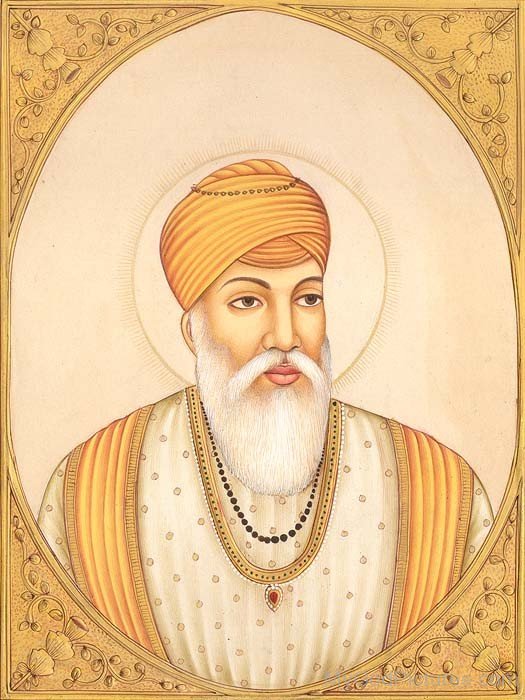 He was born in 1479. Guru Amardas took up cudgels of spirituality to fight against caste restrictions, caste prejudices and the curse of untouchability.

He strengthened the tradition of the free kitchen, Guru Ka Langar (started by Guru Nanak), and made his disciples, whether rich or poor, whether high born or low born (according to the Hindu caste system), have their meals together sitting in one place.

He thus established social equality amongst the people. Guru Amardas introduced the Anand Karaj marriage ceremony for the Sikhs, replacing the Hindu form.

He also completely abolished amongst the Sikhs, the custom of Sati, in which a married woman was forced to burn herself to death in the funeral pyre of her husband. The custom of Paradah (), in which a woman was required to cover her face with a veil, was also done away with. 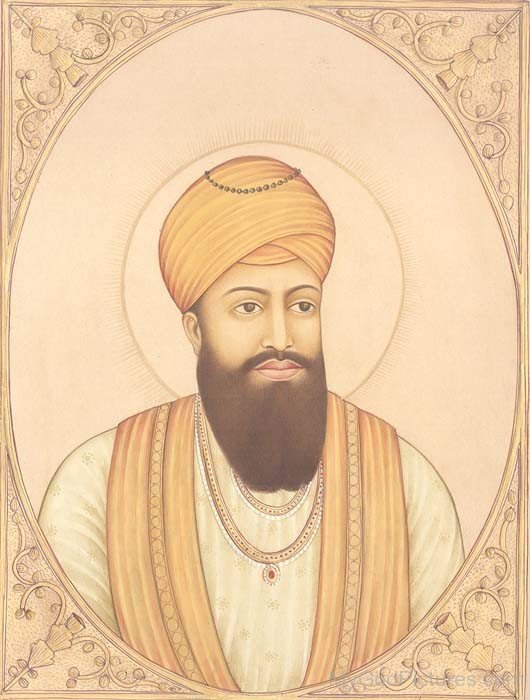 He was born in 1534. Guru founded the city of Amritsar and started the construction of the famous Golden Temple at Amritsar, the holy city of the Sikhs. He requested Muslim Sufi, Mian Mir to lay the cornerstone of the Harmandir Sahib.

The temple remains open on all sides and at all times to everyone. This indicates that the Sikhs believe in One God who has no partiality for any particular place, direction or time.

The standard Sikh marriage ceremony known as the Anand Karaj is centered around the Lawan, a four stanza hymn composed by Guru Ram Das . The marriage couple circumscribe the Guru Granth Sahib as each stanza is read. The first round is the Divine consent for commencing the life through marriage. The second round states that the union of the couple has been brought about by God. In the third the couple is described as the most fortunate as they have sung the praises of the Lord in the company of saints. In the fourth the feeling of the couple that they have obtained their desire and are being congratulated is described. 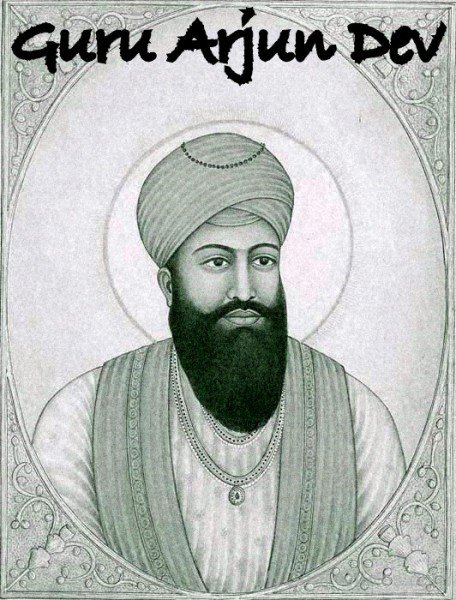 He was born in 1563. He was the third son of Guru Ram Das Ji. Guru Arjan was a saint and scholar of the highest quality and repute.

He compiled the Adi Granth, the scriptures of the Sikhs, and wrote the Sukhmani Sahib. To make it a universal teaching, Guru included in it hymns of Muslim saints as well those of low-caste pariah saints who were never permitted to enter various temples.

Sri Darbar Sahib welcomes all without discrimination, which is by the four doors that are open in four directions. Guru became the first great martyr in Sikh history when Emperor Jahangir ordered his execution. 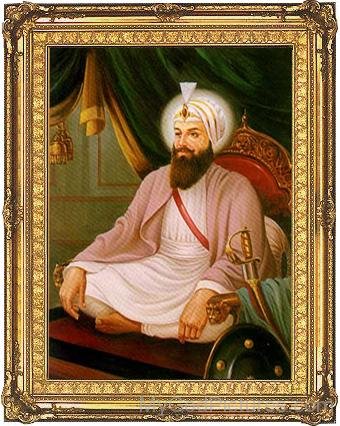 He was born in 1595. He was the son of Guru Arjan Dev and was known as a “soldier saint,” Guru Hargobind ji organised a small army, explaining that extreme non-violence and pacifism would only encourage evil and so the principles of Miri-Piri were established.

Guru ji taught that it was necessary to take up the sword in order to protect the weak and the oppressed. Guru ji was first of the Gurus to take up arms to defend the faith. At that time it was only emperors who were allowed to sit on a raised platform, called a takhat or throne. 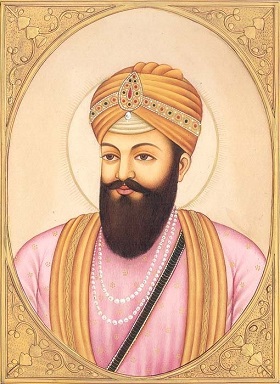 He was born in 1630, spent most of his life in devotional meditation and preaching the teachings of Guru Nanak.

Although Guru Har Rai Ji was a man of peace, he never disbanded the armed Sikh Warriors (Saint Soldiers), who earlier were maintained by his grandfather, Guru Hargobind. He always boosted the military spirit of the Sikhs, but he never himself indulged in any direct political and armed controversy with the Mughal Empire. Guru cautiously avoided conflict with Emperor Aurangzeb and devoted his efforts to missionary work.

He also continued the grand task of nation-building initiated by Guru Hargobind. 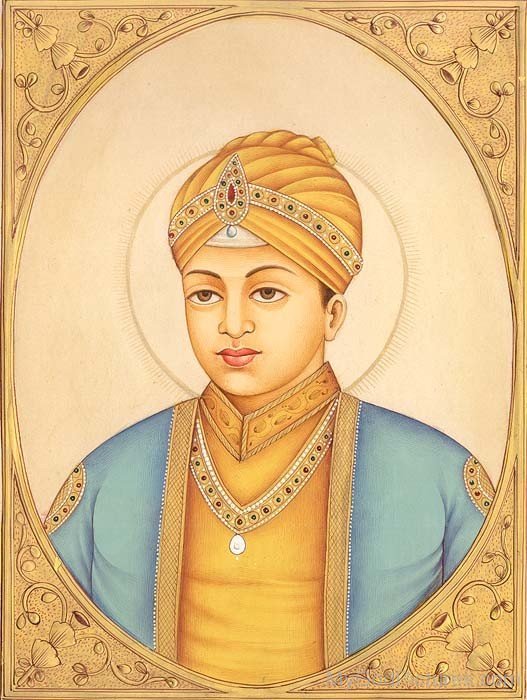 He was born in 1656. Guru Har Krishan was the youngest of the Gurus. Installed as Guru at the age of five, Guru astonished the Brahmin Pundits with his knowledge and spiritual powers.

To the he proved to be the very symbol of service, purity truth. The Guru gave his life while serving and healing the epidemic-stricken people in Delhi. The young Guru began to attend the sufferers irrespective of cast and creed. Particularly, the local Muslim population was much impressed with the purely humanitarian deeds of the Guru Sahib and nicknamed him Bala Pir (child prophet).

Even Aurangzeb did not try to disturb Guru Harkrishan Sahib sensing the sensitivity of the situation, but on the other never dismissed the claim of Ram Rai also.

Anyone who invokes Guru Har Krishan with a pure heart has no difficulties whatsoever in their life. 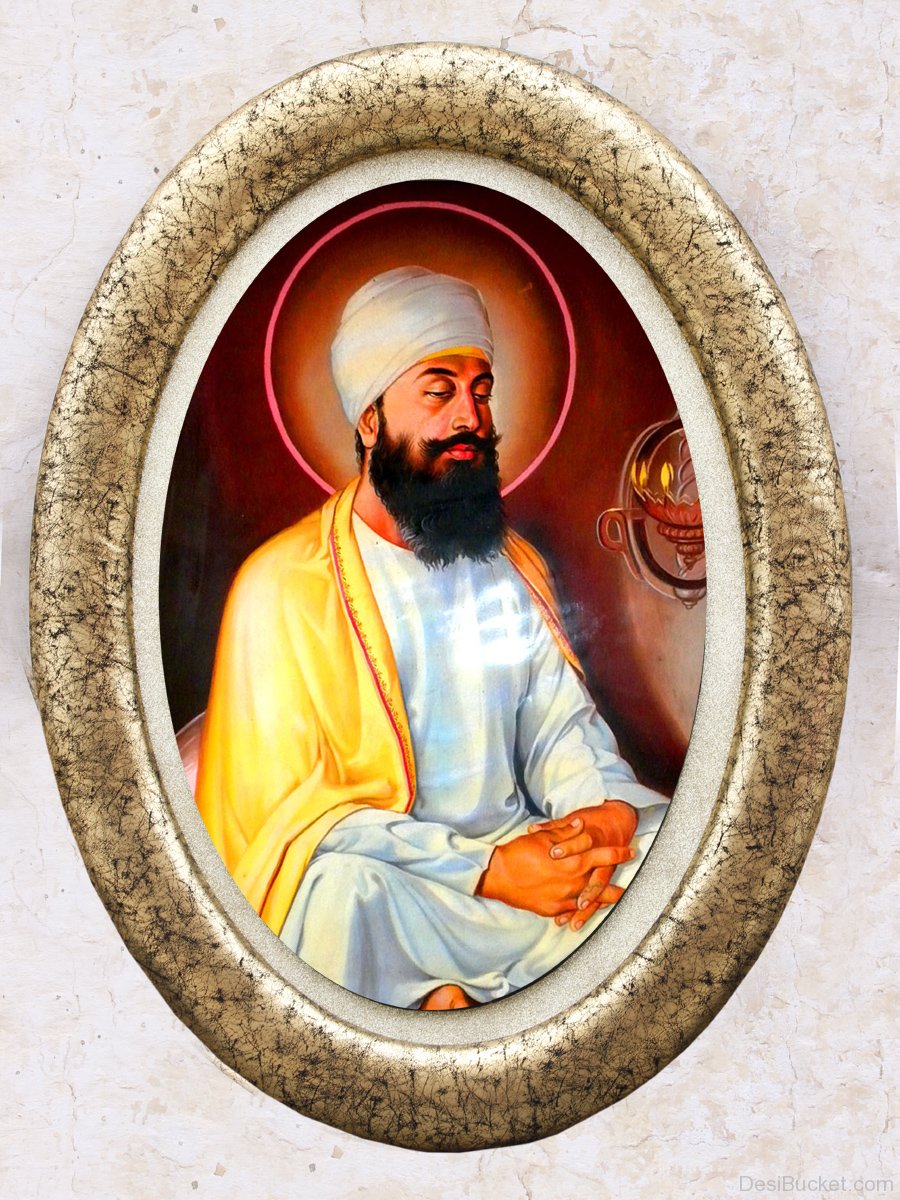 He established the town of Anandpur. The Guru laid down his life for the protection of the Hindu religion, their Tilak (devotional forehead markings) and their sacred () thread. He was a firm believer in the right of people to the freedom of worship.

It was for this cause that he faced martyrdom for the defense of the down-trodden Hindus. So pathetic was the torture of Guru Tegh Bahadur that his body had to be cremated clandestinely (a follower burned down his own home to cremate the Guru’s body) at Delhi while his severed head was secretly taken four hundred kilometers away to Anandpur Sahib for cremation. Because of his refusal to convert to Islam a threatened forced conversion of the Hindus of Kashmir was thwarted. 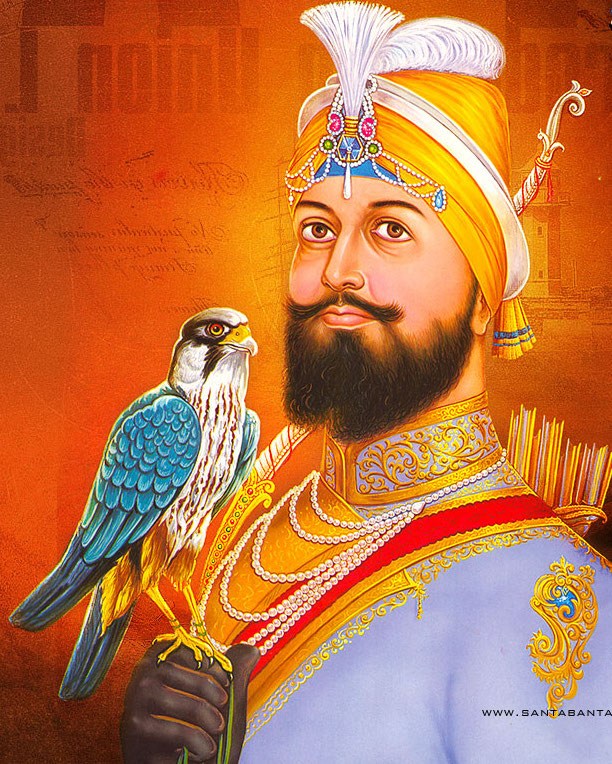 He was born in 1666 and became Guru after the martyrdom of his father Guru Tegh Bahadur.

He created the Khalsa (The Pure Ones) in 1699, changing the Sikhs into a saint-soldier order with special symbols and sacraments for protecting themselves. After the Guru had administered Amrit to his Five Beloved Ones, he stood up in supplication and with folded hands, begged them to baptize him in the same way as he had baptized them. He himself became their disciple (Wonderful is Guru Gobind Singh, himself the Master and himself the disciple). The Five Beloved Ones were astonished at such a and represented their own unworthiness, and the greatness of the Guru, whom they deemed God’s representative upon earth. He gave the Sikhs the name Singh (lion) or Kaur (princess).

He fought many battles against the armies of Aurangzeb and his allies. After he had lost his father, his mother and four sons to Mughal tyranny, he wrote his famous letter (the ) to Aurangzeb, in which he indicted the Grand with his treachery and godliness, after which the attacks against the Guru and his Sikhs were called off.

Aurangzeb died soon after reading the letter. Soon, the rightful heir to the Mughal throne sought the Guru’s assistance in winning his kingdom. It was the and fear of the growing friendship between the new Emperor and the Guru which lead to the sneak attack of the Pathan of Wasir Khan who inflicted the wound which later caused the Guru’s death.

Thus the tree whose seed was planted by Guru Nanak, came to fruition when Guru Gobind Singh created the Khalsa, and on 3 October 1708, appointed Guru Granth Sahib as the Guru. He commanded: “Let all bow before my successor, Guru Granth. The Word is the Guru now.”