Guru Granth Sahib is a scripture of the Sikhs, for the Sikhs regard and respect the Granth (holy book) as their living Guru. The revealed holy text spans 1430 pages and contains the actual words spoken by the founders of the Sikh religion (the Ten Gurus of Sikhism). 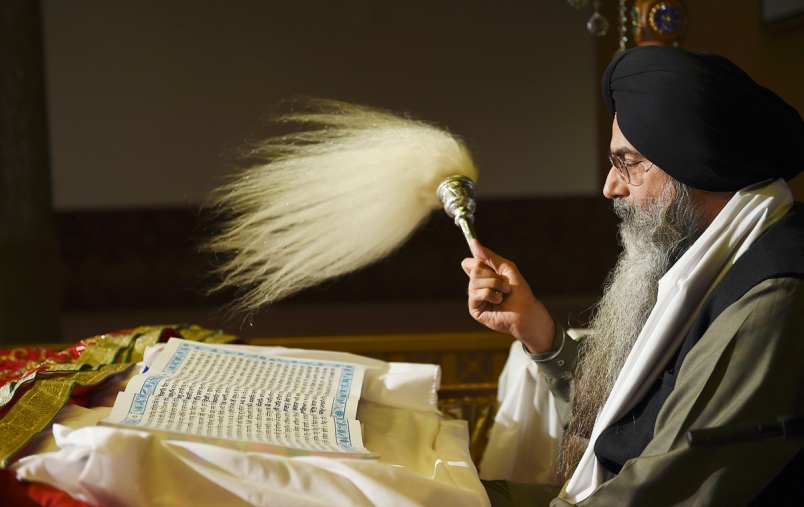 the composition and compilation

Guru Granth Sahib was bestowed the Guruship by the last of the human form Sikh Masters, Guru Gobind Singh Ji in 1708. Before passing away, Guru Gobind Singh Ji decreed that the Sikhs were to regard the Granth Sahib as their next and everlasting Guru. Guru Ji said – “Sab Sikhan ko hai Guru Manyo Granth” meaning “All Sikhs are commanded to take the Granth as Guru”. So today, if asked, the Sikhs will tell you that they have a total of 11 Gurus. (10 Gurus in human form, and the eternal Guru, the Guru Granth Sahib).

Unique amongst the world’s major religious scriptures, while compiling the Guru Granth Sahib, the Sikh Gurus incorporated not only their own writings, but also included the writings of other contemporary saints from Hinduism and Islam (including saints belonging to the lowest strata of untouchables in the Hindu Caste System), who believed in the unity of God and denounced superstition and caste.

Further, the composition and compilation of the Guru Granth Sahib performed by the Sikh Gurus themselves, rather than being performed by their adherents and followers, an aspect that has been highlighted by historian-scholars while discussing the authenticity of the preachings of the different teachers and prophets of the world, as known to mankind today.

When one visits a Gurdwara (a Sikh temple), the Guru Granth Sahib forms the main part of the Darbar Sahib or Main Hall. The holy book is placed on a dominant platform and covered in a very beautiful and attractively coloured fine cloth. The platform is always covered by a canopy, which is also decorated in expensive and very attractive coloured materials. The text in which the Granth is written is a script called Gurmukhi (literally “From the Guru’s mouth”), which is considered a modern development of the ancient language called Sanskrit. 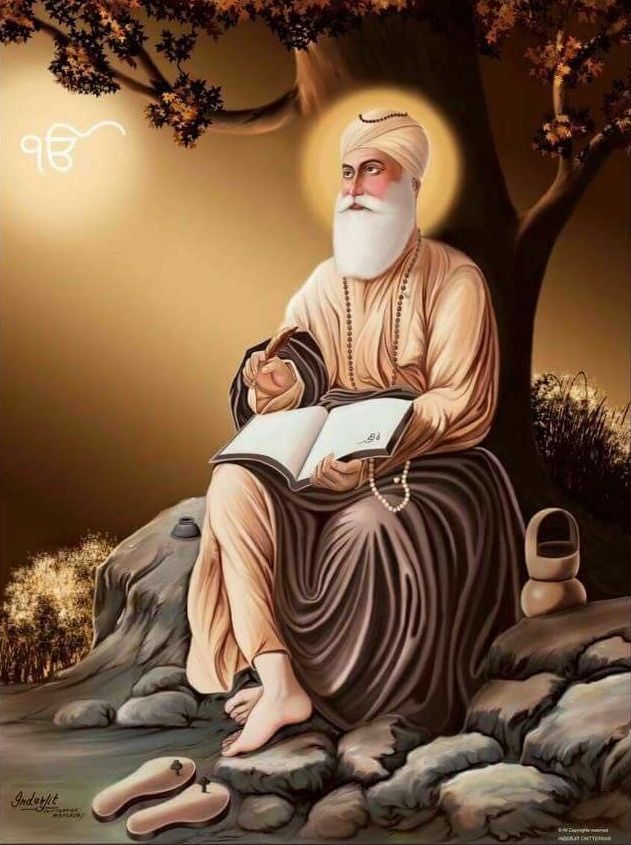 Guru Nanak brought the Word of God to manifest upon Earth. Through his Hymns and Prayers (Shabads), he inspired and uplifted humankind to live a life of truth, righteousness, and spirituality. These enlightening words were sung by his companions, Bala and Mardana, and by the (congregations) that grew up around Guru Nanak. In his later years at Kartarpur, it became customary for the members of the Sikh community to sing certain hymns on a daily basis: Japji in the morning; So Dar and So Purakh, the beginnings of , in the evenings.

Guru Angad, Guru Amar Das Guru Ram Das all composed Shabads (hymns), and the Sikhs began to collect these in small books, called . Chanting these Shabads, the Sikhs became vehicles for the vibrations of the “Word of God”, and they achieved a state of higher consciousness, a transcendent meditative union with God and Guru.

Even early in Sikh history, however, there were and pretenders to the Throne of Spirituality. The elder brother of Guru Arjun, Prithia, composed his own hymns and passed them off as writings of Guru Nanak. Although existed of authentic Gurbani, there were many different collections of and many versions of the same Shabads.

Guru Arjun realized that a standardized, authenticated collection of the Guru’s Bani (called Gurbani) was needed to preserve the integrity of the Shabad. The most complete collection of Shabads of Guru Nanak, Guru Angad Guru Amar Das was in the possession of Mohan, a son of Guru Amar Das. 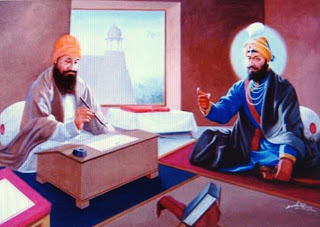 Guru Gobind Singh proceeded to dictate it to Bhai Mani Singh, who recorded it on paper. While some have questioned the authenticity of this story, it is well for us to remember that, of course, Guru Gobind Singh was no ordinary person at all. And, in the old days of bards and story-tellers, it was not unusual for them to recite from memory entire epic poems. Hajis, for can recite the entire Qur’an and many Hindus priests could recite the Mahabarata. In a time when many people could not read or write, oral traditions were very important. The Sri Guru Granth Sahib is like the Qur’an and the Gita and is set in the form of music and rhythm making them much easier to remember.

Guru Gobind Singh included the Shabads of his father, Guru Teg Bahadur, but he did not include his own Shabads; instead, he placed them in a separate Granth, the Dasam Granth. The Dasam Granth is not revered as Guru, however. The great task of re-writing the entire Guru was finally completed in 1705. The “Damdama Sahib Bir” as it is now called was then taken to Nanded where it was installed.

The message of Guru Granth Sahib

The Guru Granth Sahib provides unique and guidance and advice to the whole of the human race. It is the torch that will lead humanity out of Kaljug, (the dark era) to a life in peace, tranquillity and spiritual enlightenment for all the nations of the World. The main message can be summarised as: