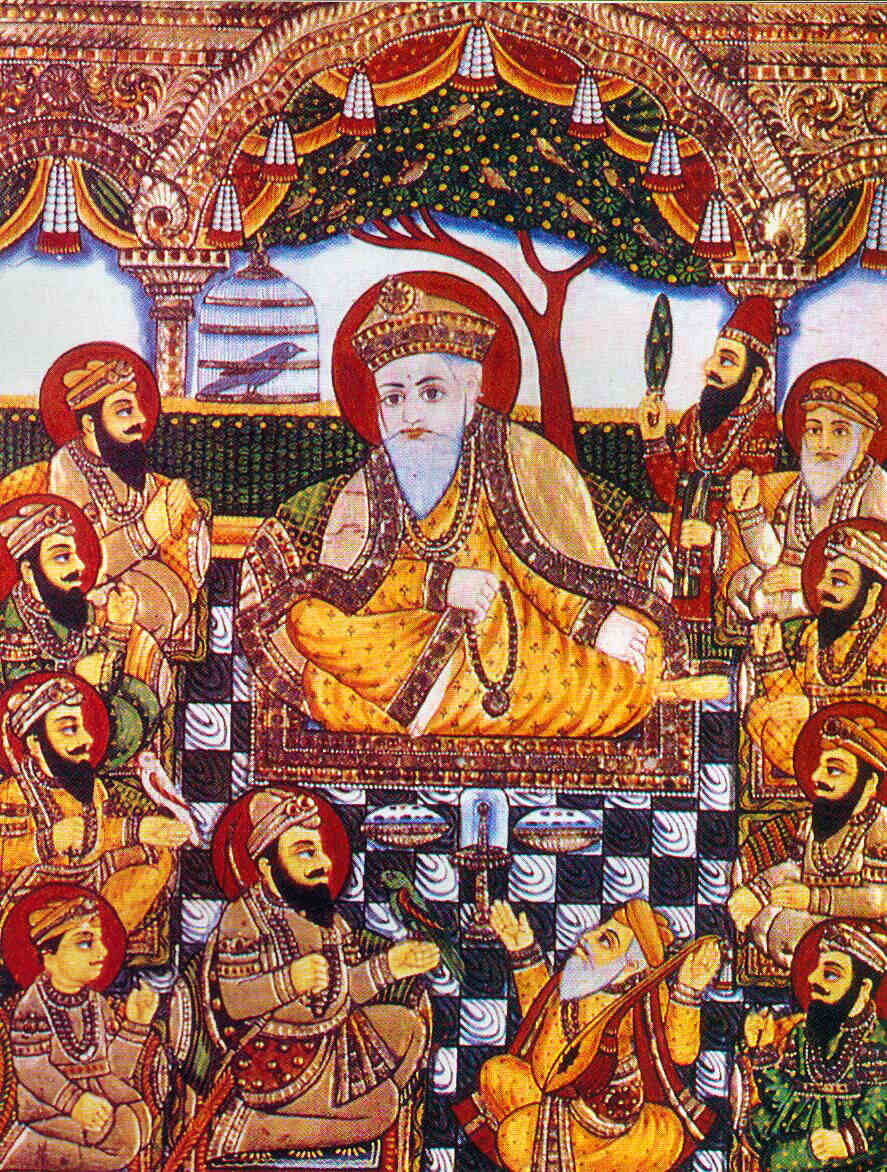 Sikhism is a way of life; a disciplined mode of living coupled with a belief in the presence and unity of one God, the equality of all mankind, dedicated faith in the Gurus’ word and love for all of humanity.

The stepping stone for a Sikh is to accept the one God and remember Him with mind and acknowledge Him through ones daily actions. A Sikh puts his trust in God alone rather than in other beings, relatives, wealth or possessions.

To act in His name and gradually reach a stage where, as the Guru says, “Water mingles with water and light merges in the light, discarding their separate existence.”

Originality and clarity of the Sikh faith instrumental in promoting it from its inception in about 1499 and the voluntary adoption by the masses with eagerness and whole-heartedness. “Keep the message simple” appears to be the common thread throughout Sikhi concepts. Simran – meditating and remembering the Creator and Seva – willingness to give ones for free – are the bedrocks of Sikhi. If you cannot focus your mind on the Lord; see God in all; in the Creator, then the journey is going to take a little longer.

Equality, non-discrimination, true justice, and worship of only One God, are basic values that are well-known and gave the world a simple and universal faith. Today, some 540 years after the birth of the founder of Sikhi, Guru Nanak, Sikhism has more than million followers, and it is the faith in the world. Sikhi is respected the world over and is known as a religion of peace and unity of mankind.

The Sikh Gurus promoted all human beings as one and the same, and they are all above discrimination. The Gurus showed real love for all of humanity. Muslims were equally dear to them as Hindus, or any others.

It is well known that Bhai Mardana a Muslim, spent his whole adult life with Guru Nanak, accompanying the Guru with his Rabab as a musician and the Guru’s closest companion everywhere that the Guru went.

The foundation of Harimandir Sahib in Amritsar – the premier Sikh shrine, was laid by a Muslim saint Hazrat Mian Mir. Guru Arjun Dev incorporated in Guru Granth Sahib – the Sikh Holy Book, hymns of God-oriented saints – both Hindus as well as Muslims. Hymns of any saint that found a place in this Holy Book, are like those of the Gurus, and every Sikh bows equally in reverence to all of them.

The Sikh faith is a faith of learning and spiritual self-improvement; of dialogue; of intellectual evolution and certainly not of “conversion”; a person becomes a Sikh by choice and certainly not by compulsion or with inducements or incentives or by any other devices. It is a truly interfaith approach to religion undertaken in where the universal unity of the human spirit is . Sikhi promoted interfaith principles when the word ‘interfaith’ did not exist!

One all the Universe and all the peoples.

Gender equality:- From about 1499, Sikhi accepted women as the equal of men, who have all the rights and privileges enjoyed by men. Women are considered to have the same soul as men and have an equal right to grow spiritually. Sikh women are allowed to lead religious congregations, to take part in Akhand Path (the continuous recitation of the Holy Scriptures), to perform Kirtan (singing hymns from Guru Granth Sahib), to work as a Granthi (priest) or a preacher and to participate freely in all religious, cultural, social, political and secular activities.

Race equality:- The Sikh Gurus have the concept of the equality of mankind in the sacred verses found in the Sikh holy scripture, Guru Granth Sahib. Guru Nanak says in Japji Sahib: “Accept all humans as your equals, and let them be your only sect” (Japji 28), and Guru Gobind Singh tell the world: “manas ki jat eke – all of mankind as a single caste of humanity”. Therefore, Sikhs believe that all human beings are equal. “We are all sons and daughters of Waheguru, the Almighty Lord” is the message promoted by the Sikh Gurus.

Remember God (Naam Japo):- This is one of the three pillars of Sikhism; the remembrance of God by repeating and focussing the mind on His name and His blessings.

Honest work(Kirat Karni):- To work and earn by the “sweat of the brow”, to live a family way of life, and practice truthfulness and honesty in all dealings is a fundamental part of Sikhi. The term means to carry out good deeds and earn , pure and upright livelihood by exercising ones skills, abilities, talents and hard for the benefit and improvement of the individual, their family society at large.

Do Sewa:- is a word used to refer to “selfless service”, performed without any thought of reward or personal benefit. All Sikhs are encouraged by their Guru, Guru Granth Sahib to perform selfless voluntary service for the community. This is not only good for community relations but also is good for the uplifting of the person. Sikhs should engage free service in Gurdwaras; washing dishes, cleaning floors, serving food, even polishing others shoes and serving in community ; hospitals, etc.

Respect for rights of others:- In this regard, the ninth Nanak, Guru Tegh Bahadur provides a very valuable lesson for the Sikhs and for the other concerned peoples of the world relating to the security and protection of all human beings within our society. It is very common for communities to protect their own members. The evidence for is well documented in the history of mankind. In protecting seeking to spread their own religious beliefs or their own traditions or culture, they sometimes decimate or destroy the beliefs and ways of others; when one becomes on “own people” or ones “own religion”, or ones “own community”; this can become the beginning of serious problems and many major conflicts have started in this way. Guru Tegh Bahadur is a example to the whole world of how one should care for their and protect their rights; He stood by the Kashmiri Hindus in a valiant effort to protect their way of life and to practice their religion freely.

Right to defend:- Guru Gobind Singh has very clearly set the mission for the Sikhs to tread the unique path of Akal Purakh ki Fauj – the ‘Army of Lord’ to protect and serve all the peoples of the World – only then can it be rightly called “Akal Purakh ki Fauj”. When the Khalsa starts serving the needs of a or starts being concerned only with itself, it will fail in its duties as set out by the tenth Guru.

Fear none but God:- It is known that fear is an emotional response to threats and danger. Although fear is different from anxiety, which typically occurs without any external threat, the two bring much pain and misery to the person who is suffering from these two emotions. Fear is related to the specific of escape and avoidance, while anxiety is the result of threats that are perceived to be uncontrollable or unavoidable. The Guru Granth Sahib offers guidance on how one should become fearless in their life. The trials and tribulation of modern life means that both these ailments are on the increase in the world; many suffer from anxiety and fear due to losing one’s identity and/or security; from constant and sustained financial, health and emotional pressures; from humiliation, oppression, victimization, feelings of inferiority, persecution of one’s group, and other kinds of discrimination, etc. These external agents are relentless and become such a strain that many suffer constantly in pain.

Sewa and support for the weak:- Sikhism is founded on the principles of Sarbat da – working towards the “common good of all”. For Sikhs, this means reaching out to serve and uplift all of humanity as an expression devotion to the Creator. Many other Sikh institutes, such as Guru-ka-Langar, Kirtan, Paath, etc., on the performance of Seva by many in the congregation. So the principles of Seva underpin many Sikh values – such is the importance given to Seva in Sikhism. Seva or Karseva also shortened to ‘Sewa’ is a word used to refer to “selfless service” or “free-voluntary service”, performed without any thought of reward or personal benefit. Doing ‘Seva’ is a central Sikh tenet; all Sikhs are encouraged by their Guru (Guru Granth Sahib) to perform Seva or Selfless Service within the community. Not only is this good for community relations but it is also good and moral uplifting of the person performing the voluntary service.

Live to the highest spiritual level:- O Lord, give me this boon. May I never ever shirk from doing good deeds. Never may I fear when I go to fight the enemy. With surety, victory will be mine

Don’t use force:- Kabeer, to use force is tyranny, even if you call it legal. When your account is called for in the Court of the Lord, what will your condition be then?